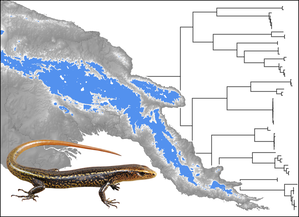 Molecular Phylogenetics of Papuascincus
Papuascincus is a genus of skinks endemic to the montane regions of New Guinea, ranging from lower montane hill forest to alpine habitats at elevations close to 3000 m above sea level.
​
Together with Allen Allison, Fred Kraus, and the labs of Shai Meiri and Salvador Carranza, we published the first wide-spread molecular phylogenetic analysis of Papuascincus. We explored genetic diversity, biogeographic history and body size evolution in the genus. We uncovered substantial, and previously unrecognised, genetic diversity, and identified several lineages as candidates for potential elevation to species status.

We are currently working on resolving the taxonomy of this genus - stay tuned for updates! 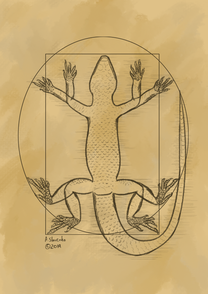 Ecomorphology of Papua New Guinea's skinks
Morphology is expected to represent species' ecological niches, based on microhabitat and ecological selection pressures dictating morphological adaptations for efficient performance. However, the presence of competitor species is predicted to cause niches to contract.

Working with Allen Allison and Shai Meiri, we examined how competition affects morphological niche partitioning in the skink fauna of Papua New Guinea. We found that the morphology of Papua New Guinea's skinks varies most strongly with elevation, with little effect of competition. We suspect the extreme highland habitats lead to strong selection on skink morphology. 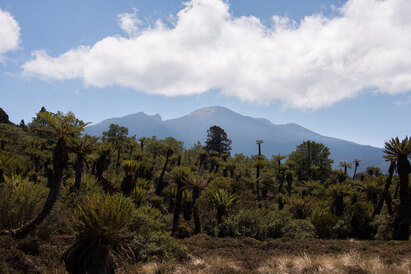 Taxonomy of Montane New Guinean Skinks
The towering mountains of New Guinea are home to a large radiation of skinks. They range from lower montane hill forest to the summits of mountains over 3500 m above sea level, and many exhibit remarkable adaptations to unusually cold climatic habitats. However, the taxonomy of these animals has long been neglected, with several genera apparently being paraphyletic and poorly-diagnosed, and multiple new species awaiting formal description.
​
Working with Allen Allison, Fred Kraus, and the labs of Shai Meiri and Salvador Carranza, we employ molecular phylogenetic methods together with classic morphological approaches to resolve the taxonomy of these unique skinks.